We went camping this last weekend. We always go up to Julian to the William Heise County Campground. They have the best cabins with heat and electricity, and even outlets for the laptop and this time we even took a fan with us. We would have died without that fan. We hung out and watched movies and tried to stay cool. I didn't take many pictures because it was SO hot! I don't deal well with heat and as it turns out either does Aurora. I did manage to take a few pictures. Here are some of my favorites. 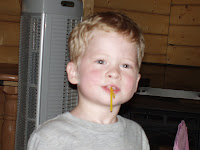 Sage put a Capri Sun straw bent in half in his mouth and was pretending he was a duck. 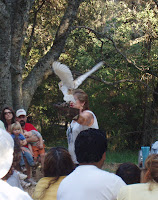 The campground had a Rescue Shelter come and talk about wild birds.
This is a Baby Barn Owl. He only weighs one pound. 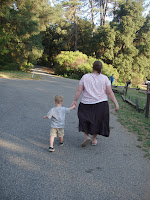 Sage and I walking back to the Cabin from the Bird Presentation.

As you probably know, I am not a camping person, but Robert and Sage love it, so Aurora and I just hung out inside the cabin watching cartoons and snacking with our fan blowing on us. We are the ultimate Girly Girls. Even though it was HOT, it was fun. The highlight of the trip was the smore's. On our way up to Julian we stopped at this Restaurant we saw on Food Network's Diner's, Drive-In's, & Dives called Ramona Cafe. I had the most amazing omelet that I have ever had in my life. It was called the ABC Omelet. Avocado, Bacon and Cheese Omelet served with the best hash browns in the world. If your ever up that way you must stop and try the food. We also stopped in Santa Ysabel and bought some Dudley's Bread. Hooray for Potato Bread!!! All in all it was a great trip, although we won't be doing again in the summer.
at July 09, 2008