I've been working on this post for 8 years and it's taken me this long to get my words together. I know that I've left some things out but this is all that I am capable of sharing right now.

After we lost Bryton we were ecstatic to find out that we were pregnant again. We tried not to get too excited until we made it past 10 weeks gestation. We started making plans and buying things that we would need for the baby.

I had severe morning sickness but the doctor assured me that everything was fine. I spent my days coming up with names and getting our small basement apartment ready. At 19 weeks we found out that we were having another boy and we were over the moon and couldn't wait to be parents.

We decided to come to San Diego for Christmas 2002 and shortly after we got back home to Utah I was put on bed rest. I was tired but everything was progressing perfectly. I woke on the morning of February 21st to the baby kicking me. I got up and got ready for my appointment that day. The doctor took one look at me and knew that something was off. Blood was drawn and I was sent home to rest. 1 hour later my doctor called and insisted that I get to the hospital. I was immediately admitted and Robert was called at work and told to come join me.

The doctors told Robert that I had gone septic and that my kidney's and heart were shutting down. They then told him that our son had passed way and to not expect me to live through the delivery. Robert called my parents and they drove 800 miles through the night to get to the hospital in time.

I was sent to the ICU and given pitocin to start labor. I remember crying and it hurting so much but being afraid to scream and let the nurses know how much pain I was in. I wasn't allowed to have any pain killers because of the multiple organ failure, so I delivered our son without meds. Our perfect Angel was born at 2am on February 22, 2003. He weighed 2 lbs and was 16 inches long.

As soon as Hayden was born I received 2 different blessings(one was from my OB) and 4 blood transfusions. I was pumped full of medications and to the shock and disbelief of the doctors and against all odds, I lived through the night.

The next morning the nurses asked if I wanted to see our son and I wanted nothing to do with him because it hurt so much. That night my Mom was able to convince me that in order to heal, I needed to say goodbye. As soon as I held him I knew he was meant to be ours and that his name should be Hayden Andrew. He was given a name and a blessing and then taken to the morgue.

The morning of the 24th I was taken off all of the machines because miraculously I was healing and my heart and kidney's showed no signs of distress. I was sent to the bereavement wing of the hospital so that I could finish recovering. I had lost so much muscle and coordination that I had to learn how to walk again before I could go home.

I was so worried that I wouldn't be able to attend my own sons funeral which was planned for the 28th. I worked really hard and thanks to the amazing care I recieved I was able to go home on the 27th. I still wasn't 100% better so I spent the next 4 months at home on bedrest while I recovered. It was 5 months until I was released from my doctors care.

During this time I experienced some of the darkest days of my life and I was so scared that it would drive us apart. At one point I was so depressed that I seriously considered taking my own life. Luckily, I was blessed with an amazing husband who loved me through the darkness and the worst experience of our lives actually made us stronger and more determined to love each other.

To this day my doctors still have no clue what made me so sick or how on earth I survived. 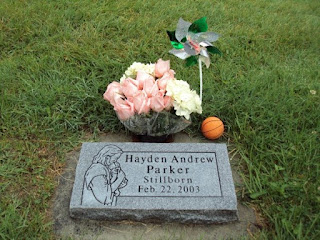 Email ThisBlogThis!Share to TwitterShare to FacebookShare to Pinterest
Labels: Hayden