Over the last 3 1/2 weeks Aurora has been obsessed with Sage's helmet and has been begging for one of her own. I plan on getting her one but not until Christmas when she gets her first bike.﻿
She has also been obsessed with my car accident that I got in last month. Yesterday when we went to get Sage and Savannah from school, she said...
" Momma, I'm gonna bring Sage's helmet for me to wear so if you crash again I won't get hurt." 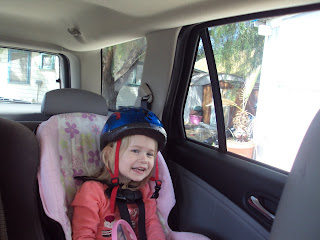 ﻿At first I was a little irritated, after all It's not like I go around getting in accidents, in fact I've never been in one that was my fault except for this one and I've never gotten a ticket, so I think I'm a pretty great driver. But then I realized that she had one of her little mischievous grins on her face and then she started laughing and said...
"Momma, don't be sad. I'm just being a doofus."
We all started laughing, after all like she said she was just being a doofus.
* In our family, Doofus is not a derogatory term, It's a funny thing to say.
at September 23, 2010

Email ThisBlogThis!Share to TwitterShare to FacebookShare to Pinterest
Labels: Aurora

I love seeing her run around with that thing on! Maybe she's protecting herself from Gabby!