Daddy, We Got You Wolverine!

Tuesday night I took Sage with me to Target to buy him some new school shoes as well as Robert's Birthday present. Robert has been wanting the movie X-Men Origin's Wolverine movie ever since it came out, so Sage and I decided to pick it up for Robert.

We also decided to get him an iTunes gift card to feed his music obsession. 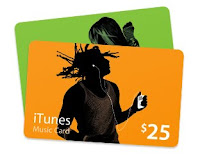 While in the store and all the way home I kept telling Sage not to tell his Daddy about the presents we just bought because it was a surprise for his Daddy's Birthday. He promised he wouldn't but as soon we got out of the van and into the house, he proudly announced to Robert that he couldn't tell him about the Wolverine Movie and iTunes card because it was a secret for his birthday. Needless to say the surprise was ruined but seriously if your gonna have your birthday surprise ruined isn't that the way you'd want it to happen?
at November 18, 2009